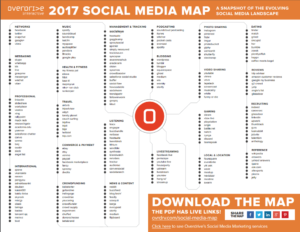 Each year Overdrive have been producing social media maps. Typically, they are released mid-year and show the evolution of social media in terms of new networks, platforms and tools.
I’m a big fan of maps. They help navigation as well as understanding changes though time and there have been many changes since the first map Overdrive produced back in 2013. We’ve included the Overdrive 2017 social media map as well as those from 2016, 2015, 2014 and 2013. The Overdrive 2013 social media map is the only without the date and included ‘social networks’ and ‘B2B social’. In a pre-WhatsApp era, messaging didn’t feature as a section.
The 2013 social media map included social media conferences, a useful source of the latest developments on social media. This didn’t appear on future maps, probably as in a constantly connected world and with Twitter and LinkedIn most business owners and managers see updates on a regular basis.
Plus, in 2014 they divided social networks into personal, private (closed) and professional. 2014 also saw the addition of social travel and social commerce. In 2013 there were so few review sites, they were bundled into the travel section.
Another feature on the 2013 map were URL shorteners. These weren’t available as standard or automatic with sites like Twitter, so as every character counted, the only way to reduce your lengthy URL was to find a URL shortening site.
Social coupons in 2013 became part of social commerce in 2014 but one of the biggest changes in 2014 was a new section called social recruiting. Along with social recruiting, which has continued to feature on the maps, 2014 saw ‘Private social networks’ and ‘social music networks’ incorporated into the mix. Ecommerce platforms was added for the first and last time as in 2015 this became’ social commerce and payment’
Other new additions to the social media map with ‘tools’ becoming two specific areas: The rise of wearables included the social media landscape as ‘health and fitness social networks’ were introduced as a separate category. Podcasting was also added back into the map. https://www.devonhealthandwellbeing.org.uk/antibiotics-online-uk/. This map also showed which tools were websites, apps, platforms or had sponsorship opportunities. This has been removed from the 2017 map. The 2017 social media map presents a cleaner, less cluttered landscape. Social networks become ‘networks’ and professional social networks are now named ‘professional’.
Social search is removed which was probably overdue. Most people are aware of Google although SocialMention is now gone and not replaced into another section.
Content curation and discovery is removed, partly replaced by ‘news & content’. Microblogging is merged into ‘networks’. Social Q&A and Wikis are merged into ‘reference’. Podcasting is removed once more.
The biggest changes for 2017 are new sections

To get your copy click here.
What will the 2018 map included? Do let us know your predictions!