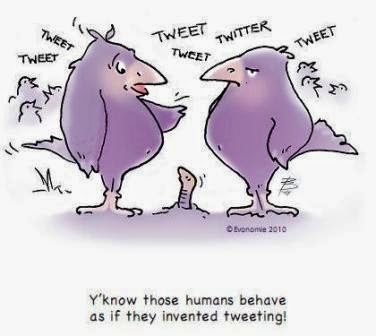 Twitter has celebrated its eighth birthday. It’s the fastest
growing social networking site and has announced some major updates.
REDESIGN
The first major change was a redesign of the existing user
profiles on Twitter’s mobile app, following the changes to the website. The
profile picture, originally found in the centre of the bar, has now been
relocated to the left of the page similar to Facebook.  However, the dimensions and resolution remain
the same.
The cover photo, which previously occupied the majority of
the space at the top of each profile, has also been moved further up the page and
its size is considerably smaller. Whereas the bio of each Twitter user could
only be seen by swiping across the cover photo, it now appears underneath it
instead in the space created by moving the cover photo.
TIMELINES
There are also two new timeline options available called
‘photos’ and ‘favourites’. Photos allows users to filter their timeline to see
all previously tweeted, embedded images whilst favourites shows everything that
the user has starred during their use of the site. This streamlines user’s
timelines and improves overall usability of the network. The new timeline
features are currently only operating on a partial roll out but it is expected
that they will be available to all users in the very near future.
PHOTO SHARING
Arguably the most important changes to twitter are those
surrounding photo sharing on the social network.  In a bid to encourage users to tweet more
photos and create extra engagement around tweeted images, the developers have
added the option to tag other users in the photos. The ability to tag up to 10
people without affecting the character count will be a major draw for users.
The tags will be part of Twitter’s extra metadata that accompanies each tweet
and will not have any effect on the length of the tweet. Following this
announcement there have been calls for the same treatment of usernames in
tweets, so that they too are excluded from the character count.
TAGGING
Tagging images also provides Twitter with a great reason to
contact its users through the guise of a notification. When a person is tagged
in a photo on the network they will receive a notification which in turn will
direct them to the website, garnering more traffic for the site overall.
NOTIFICATION OVERLOAD
As with many of the major social media websites, lots of
notifications can become annoying, but Twitter has already anticipated this.
The tagging feature comes with three options in the settings section of each
user’s profile. The default setting is set to allow anybody to tag you in a
photo but this can be changed to ‘people I follow only’ or alternatively ‘nobody
can tag me’ in photos.
Users will also have the option of adding multiple photos to
one tweet, up to a maximum of four, which will automatically be arranged into a
collage.
The latest changes to Twitter allow users more flexibility
when sharing images and there are rumours that these improvements may be even
become available for use by third party apps and developers.
What’s your take? tweet me @annmariehanlon with thumbs up or down to the Twitter changes
http://rpc.technorati.com/rpc/ping