Internet Use in the UK

Like Europe, the Americas, and Australasia, the UK enjoys a high level of internet access across the country, although some regions have been slower to adopt the technology than others. While in rural areas internet penetration has been slower than in urban regions, the past decade has seen most rural areas start to catch up.

Internet use in the UK 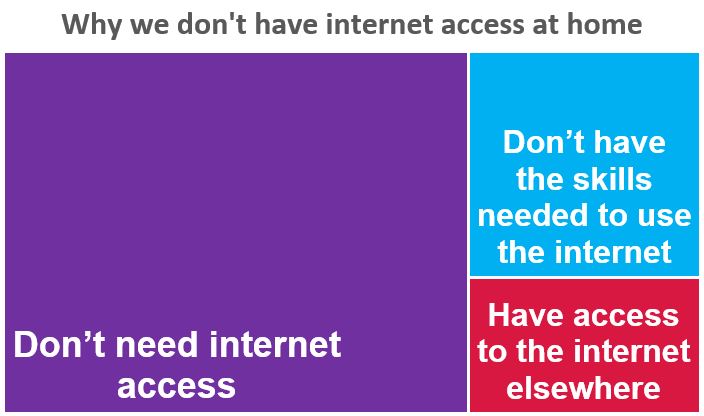 Contrasts in Internet Use Across the UK

Age as a factor in Internet Use Across the UK

With an overall access rate of 90%, most of the country has at-home internet access. However breaking the stats down by age group shows that there substantial portions of certain demographics still lack access.

Gender as a factor in internet use across the UK

Across most age groups, men are more likely to be internet users than women—but this gap is closing quickly, and is non-existent at lower age brackets. For ages 16 to 64, there are no significant differences in internet use between men and women. And overall, the gender gap is just 3%, compared to an overall gap of 6% in 2011.

Location as a factor in internet use across the UK

Internet access has improved across the entire country in the years between 2011 and 2017, but overall various regions of the UK still lag behind the larger urban centres. The highest rate of internet access is—as might be expected—in London, where 93% of people have internet at home (compared to 83% of people in 2011). The only other regions to reach 90% or higher is the South East at 92% and the East of England at 90%. Apart from Northern Ireland at 84%, all other regions have between 85% and 89% of households with internet access.

However, while this regional gap is still evident, it has reduced in size since 2011, when the spread between high and low was much larger. In 2011, 83% of London households had internet access, while in Northern Ireland the figure was at 69%, giving a spread of 14%. In 2017 the gap had closed to just 9%. Overall, every region within the UK has higher rates of internet access in 2017 than they did in 2011.

Mobile versus home internet use across the UK

While 90% of British households have internet access, somewhat fewer people use mobile internet regularly. In 2011, 36% of adults were accessing the internet via a mobile device such as a smartphone; by 2017 this figure had increased to 73% of adults.

With 90% of households having internet access—and 73% of adults having mobile internet access—it should come as no surprise that a large proportion of people regularly use the internet for shopping and other commercial purposes. In 2017, 77% of adults bought goods or services online; in 2008 this figure was at just 53%. British residents are more likely to shop locally or nationally when they buy online, but are also willing to shop abroad. 93% of adults who bought online in 2017 made at least one purchase from a UK seller. 31% made at least one purchase from a European seller, or from a seller located elsewhere in the world.

In 2009, the UK government published a policy document called The Digital Britain Report, outlining plans to ensure that the UK would remain at the forefront of the global digital economy. Among the recommendations were schemes to boost digital participation by UK citizens, as well as the provision of universal broadband access. This early focus may be at least partially responsible for the country’s high internet adoption rate.