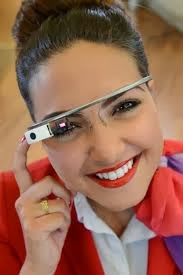 Already hailed as the future of consumer electronics, wearable technology is an industry set to be worth over $30 billion in just four years’ time with leading manufacturers Google, Samsung and Apple all clamouring to be a part of this digital revolution.
Some of the early wearable technology devices arriving in the market place include:
• Augmented Reality Glasses
• Smart Watches

Google Glass
Wearable tech in the form of augmented reality glasses, Google glass allows its users to take pictures and record videos, access the internet and send messages- basically everything a smartphone can do. Currently in its trial stages, Google Glass is already being used by travel giants Virgin Atlantic and the New York City Police Department.
Virgin Atlantic will soon be launching a pilot scheme where its upper class concierge staff will use Google Glass and other wearable technology for six weeks. This will allow staff to give passengers up-to-date flight information, weather reports and translate foreign language information. It is hoped that in the future, wearable technology could be used to inform staff of passengers’ refreshment choices and other important information.
Augmented reality glasses have also been used medically; surgeons have used Google Glass whilst performing operations and then shared the videos with their students via Hangouts on Google+.
Google Glass now even has a WordPress plug in app, enabling users to post and update stories, photos and videos using the glasses.
There are still downsides to this new technology. There have been debates on the safety of using augmented reality glasses whilst driving, one user was recently given a ticket for using Google Glass and speeding  (the case was later dropped due to a lack of evidence proving that the device was in use at the time). There were also reports of another user being questioned by police over piracy suspicions after wearing Google Glass to a local cinema.
Other augmented reality headsets include the Oculus Rift, a virtual headset forerunner in the gaming industry and headsets aimed at extreme sports enthusiasts such as the Oakley Airwave heads-up display goggle and the zeal Optics Transcend GPS Goggles.

Tech giants have become more aware of the power of the wrist and it is estimated that up to 5 million smart watches could be sold in 2014, with smart watch devices in the pipeline from Apple, Google, Samsung and Sony. The smartwatch phenomenon began when start-up Pebble technology launched its Pebble Watch which has sold more than 2502,000 units to date.  The Pebble Watch allows users to answer phone calls, receive notifications from their IOS and Android phones and control music. It also supports third party apps and Bluetooth. The latest update, Pebble 2.0 will support a raft of new advances, allowing developers greater access to components on the device and increased memory and storage.
Smartphone leader Apple is believed to have been working on its iWatch for some time now, although speculation suggests it being more of a complement to existing ios devices than a standalone gadget. Emphasis is being placed on the iWatch’s use as a health and fitness tracking device instead of an alternative to a smartphone.
As part of its ‘Galaxy’ range, Samsung will be unveiling its Galaxy Gear later this year ahead of the IFA Consumer Electronics Show. Again, the Galaxy Gear is believed to focus on health and fitness and will be a smartphone companion as opposed to a smartphone alternative.
Google is possibly developing the most exciting device in terms of smart watches and rumours began when Google bought smartwatch start-up Wimm Labs who had been working on their own smart-watch. It looks as though Google is developing a device that can operate independently of any smart-phone complete with its own apps although there is no release date yet.
As with all new technology there are still some teething problems and barriers to widespread use of wearable technology. Battery life and display quality are some of the main concerns for smart watch devices whilst theft and the safety of using headsets whilst performing everyday tasks such as driving are amongst concerns for prospective augmented reality headwear users.
http://rpc.technorati.com/rpc/ping