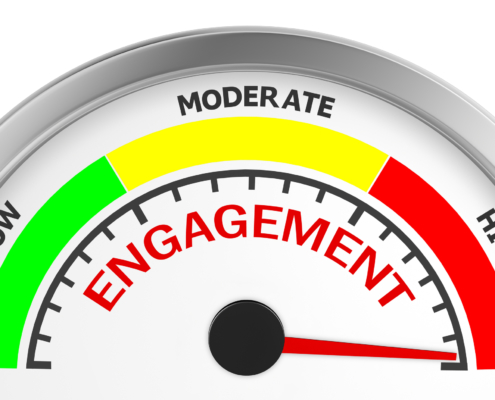 Social Media Engagement Rates have become a critical metric. But what does good look like? Read more.

Engagement is one of the most important metrics for evaluating a social media campaign. It can reveal the impact that your posts are having.

Engagement rates are measures of how people are interacting with posts.

The rate can include comments, shares, retweets, likes or other ways that people can actively engage with a post. You can look at the engagement rate for individual posts, but it can be more helpful to compare the average engagement rates for different types of posts, on different social media networks, or for different companies.

Engagement is important because it shows how effective the content is. When people take the time to actively engage with your content, you know that you’re having an impact.

Which Social Network Has the Highest Engagement Rate?

The way that people interact with content can vary between social networks and industries. It is important to have an idea of the average levels of engagement so that you know what you are aiming for. Knowing which networks generate the highest engagement rates in your sector can also help you to design a more effective marketing strategy.

Since many social media users are individuals rather than businesses, RivalIQ’s 2019 benchmarks based on more than 1800 brands provides a good estimate of engagement on each platform. The rates are calculated as the number of interactions as a percentage of the number of followers.

According to RivalIQ’s data, the overall engagement rates for each social network are:

Instagram engagement rates remain high compared to other social networks, with some analysts estimating the overall rate (for personal and business users) as high as 2.2%. The RivalIQ analysis found that the highest engagement rate was 3.96% for higher education institutions, but many other sectors were also achieving above-average rates.

On Instagram, nonprofits and sports teams both had engagement rates of 2.4% while influencers were achieving 1.97%.

The RivalIQ analysis found that there were large differences in engagement rates between industries. The highest rates were for alcohol brands at 0.14% and hotels/resorts, nonprofits and sports teams all at 0.13%.

The lowest Facebook engagement rate was for fashion brands at just 0.04%.

The engagement rate for brands on Facebook has been dropping. One reason for this is that the newsfeed algorithm changed in 2018 to prioritise content from friends and family over businesses. Facebook is therefore becoming less important for many social marketing campaigns.

The average engagement rate for Twitter is very low, but it is important to understand that there are big differences between users. A study conducted by Mention found that the mean engagement rate (calculated as likes and retweets per post) was 1695.62. However, the median engagement rate was 0 because there were many posts that generated no interactions.

Twitter can generate very high interaction rates, but many users don’t generate any retweets or likes. It’s worth looking at the typical engagement rates for businesses in your sector rather than dismissing Twitter because of the low overall engagement rate.

Engagement on YouTube is often measured differently because the video format is inherently more interactive. Some rates will include views as interactions in addition to likes, comments, or subscribes.

It can be more useful to compare the number of comments or subscribes to the total number of views to evaluate the impact of videos. A study conducted by Influence4You found that the average engagement rate calculated in this way for sponsored posts on YouTube was 4.74%. However, for some videos the rate could be more than 15%. As with other networks, the impact of posts can vary a lot.