Discover the Language of Emojis for business

Emojis can make messages more eye-catching, emotional and engaging, but they are a language in themselves. Discover more about emojiis.

Emoji are small icons or pictures that can be added to emails, social media posts and other digital texts. Many of them show emotions on the familiar yellow faces, but others represent objects or ideas.

The emoji that we use today derive from the emoticons that people originally created from letters, symbols and punctuation. Emoticons were first used in text messages and chatrooms in the 1990s, but people had to create these faces and pictures themselves every time they used them. The first true emoji were created in Japan in 1999 as simple pictures that could be inserted into texts.

More than 3000 standard emoji are now available for people to use, but the meanings they carry can vary between cultures and even between different age groups or sub-cultures. It’s essential for businesses to be aware of these differences to avoid misunderstandings. For example, the thumbs up emoji is positive in the UK but offensive in the Middle East. This is due to differences in how the gesture is used in real life.

How Are Emojis Used?

Emojis are so common across the internet that they are often used elsewhere too, especially in advertising. However, the main places where you will see them are in texts or instant messages, emails and social media posts. All of the major social networks enable emoji use, including Facebook, Twitter and Instagram. As many as 92% of internet users now use emojis.

Most people who use these kinds of sites will be very familiar with emojis so it is important for businesses to be able to use them just as effectively as their customers. Adding emojis to your marketing material or communications can induce a more emotional response and build a connection with your brand.

Emoji can be used to:

A good example of a company using emojis well is Domino’s Pizza. Emojis are a good fit for the brand and their social media manager clearly has the confidence and understanding to use them creatively. One eye-catching post created a giant pizza slice from repeated pizza emojis, grabbing attention and making people think about their product. 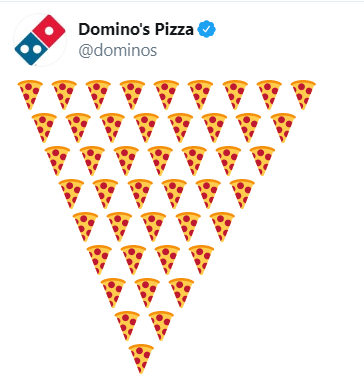 How Can Businesses Use Emojis?

Businesses can use emojis in the same way as individuals to add impact or ensure that messages are perceived in the right way. Posts containing emojis received 57% more likes on Facebook and had a 25% higher engagement rate on Twitter. However, emojis aren’t appropriate for every brand and message. If your brand presents itself as very traditional then emojis won’t be a good match. You should also avoid them on any serious messages as this could be perceived as inappropriate or even offensive.

If you think that emojis would be a good fit for your brand and the message you want to send then you need to use them wisely.

For most brands, emojis are something that can just be added to the end of a social media post or occasionally put into an email. However, if your brand has the right image and you’re confident that you understand your target audience, it can work well to experiment with emojis or to use them in unusual ways. Emojis can be just as creative as other types of language.